CCAHD partner, the African Aquatic Conservation Fund (AACF), is hosting a collaborative project entitled ‘Comprehensive Surveys of the Critically Endangered Atlantic Humpback Dolphin (Sousa teuszii) in the Saloum Delta (Senegal)’. The project is funded by the Loro Parque Foundation, with additional support from the Friends of Nuremberg Zoo, who provided funding to support participation of scientists from neighbouring countries, Chelonia Ltd., who provided two Fpods for detecting dolphin vocalizations, and Ocean Instruments, who provided a SoundTrap 500, also for recording acoustic detections of dolphins. 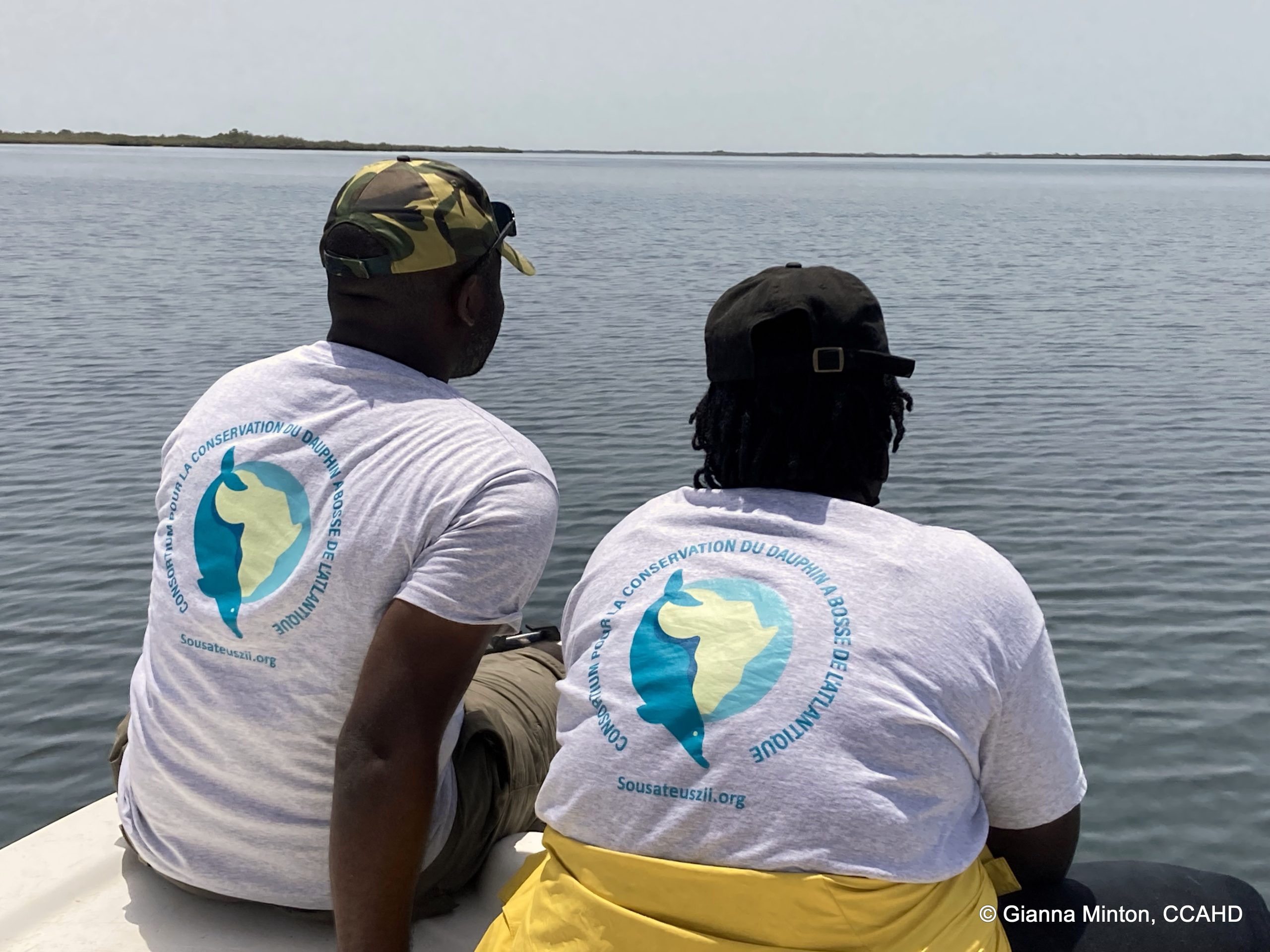 Aristide Kamla from the African Marine Mammal Conservation Organisation (AMMCO) in Cameroon and Diana from AACF in Senegal search for Atlantic humpback dolphins in the Saloum Delta, Senegal.

Fieldwork started in July 2021, when a team including international, Senegalese and Gambian scientsits conducted a 2.5 week long survey that aimed to build on the work conducted by Caroline Weir in October – November 2015.  During the 2015 survey, Caroline documented 30 groups of Atlantic humpback dolphins (AHD) over 3 weeks. By covering the same area in 2021 and 2022, the AACF/CCAHD team hopes to document the dolphins’ distribution, relative abundance and habitat preferences. The team is also conducting photo-identification to build up a catalogue of individual dolphins that can be recognised by nicks and scars on their dorsal fins and monitor their movements over time.  The project also involves the deployment of passive acoustic monitors to detect and record dolphin vocalisations, and community outreach and awareness-raising activities.  Awareness raising and capacity-building aims of the project are also strengthened by the inclusion of Senegalese and regional CCAHD partners in the fieldwork, as well as mangers and staff of the Delta Saloum National Park and five Marine Protected Areas within the Delta.

During two weeks in July 2021, the team had only four sightings of dolphins in the southern part of the Delta where many more sightings had been made in 2015, but nine sightings during the last two days spent in the northern portion of the Delta.  The SoundTrap and the FPod were deployed at a site in the South where the dolphins were regularly seen by Weir in 2015, as well as by AACF and other observers in more recent years. These were recovered in November 2021, and the data recored by both units is currently being analyzed by CCAHD partners. 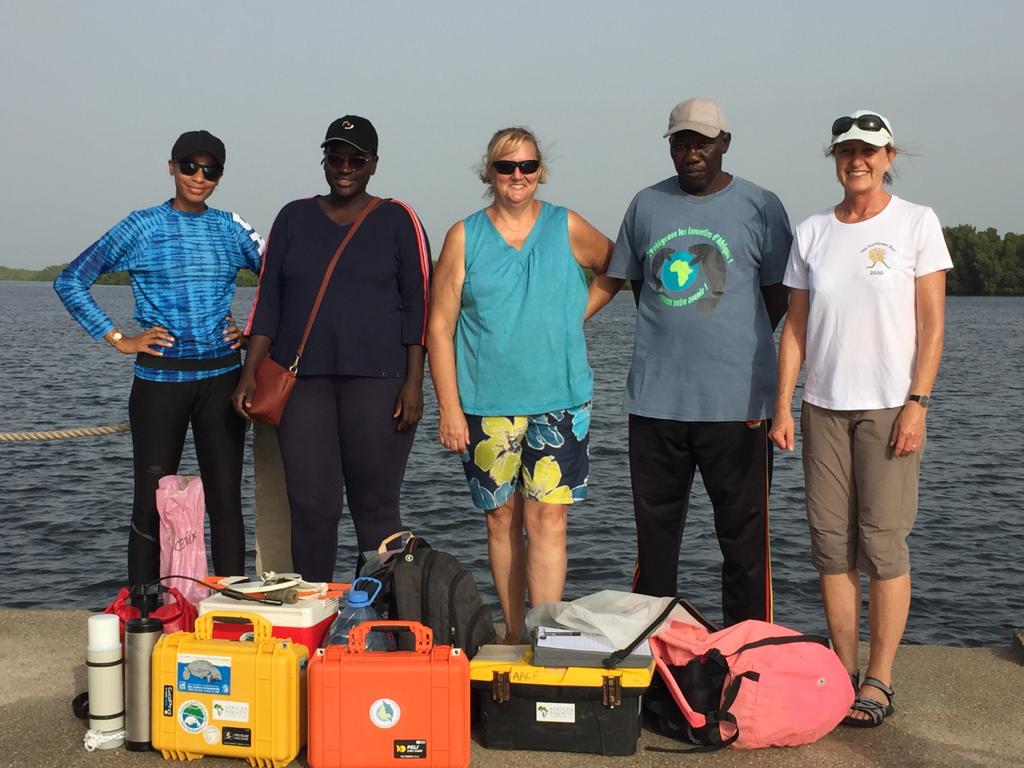 The 2021 Survey team, ready to deploy two passive acoustic units to record dolphin vocalisations and to photograph dolphins for individual identification. From left to right: Yandeh from the Gambia, Diana, Lucy and Adama from Senegal, and Gianna from CCAHD/The Netherlands.

In February 2022, the Senegal team held a ‘Dolphin Awareness Day’ in Palmarin, at the northern end of the Delta Saloum for managers from three marine protected areas as well as leaders from five local communities in northern Delta Saloum. In addition to a presentation about AHD rangewide distribution, endangered status and CCAHD, AACF staff and participants had a productive discussion about the need to protect dolphins in the Saloum and planning for future collaborative efforts 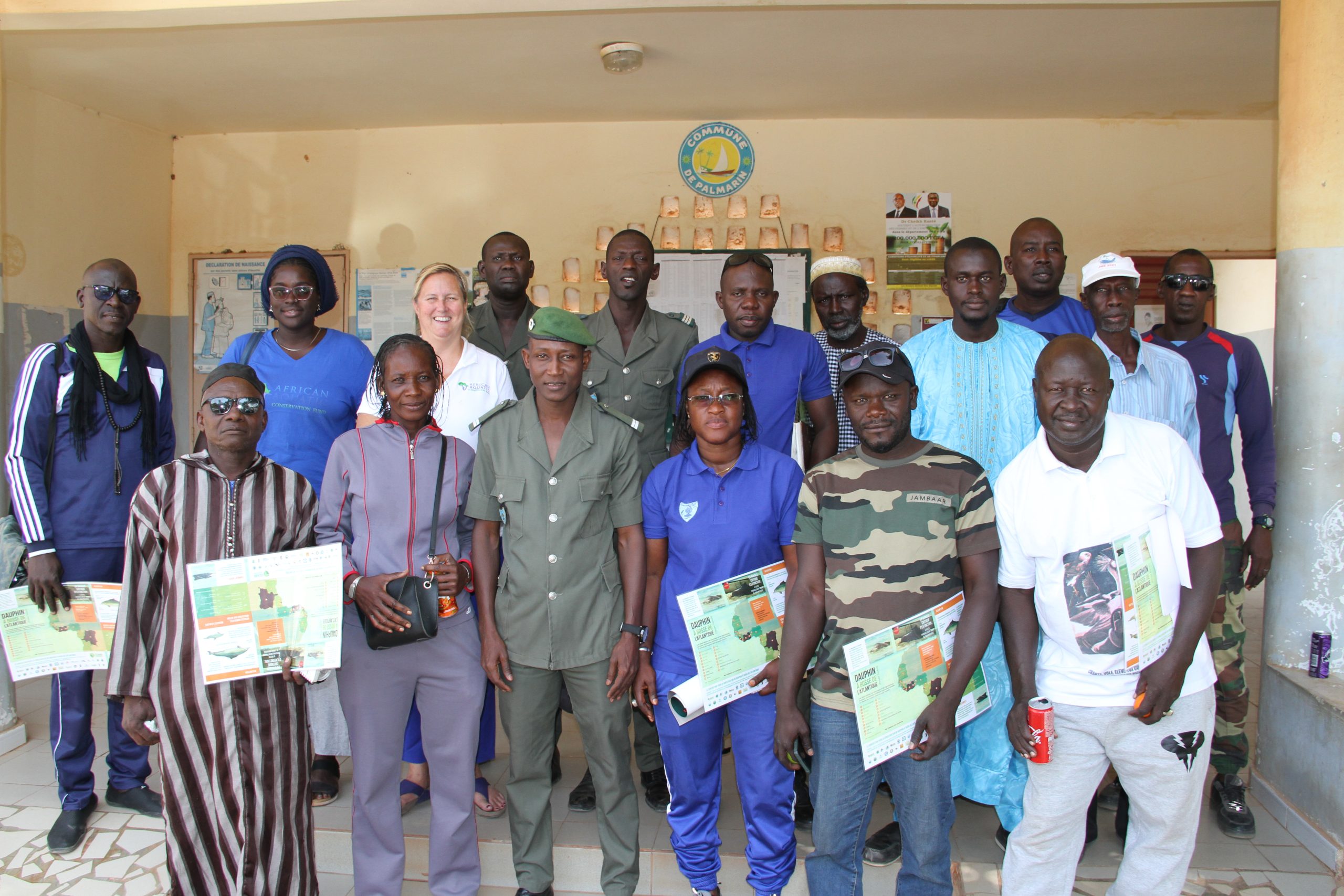 In March 2022, the AACF/CCAHD team returned to conduct another 3-week survey of the Delta.  The team logged 21 encounters over the first 12 days of survey effort based in the northern portion of the Delta.  An Fpod and a SoundTrap were successfully deployed in a ‘hotspot’ in the northern Delta where multiple sightings were recorded in both 2021 and 2022.  During the second phase of the survey based in the southern portion of the Delta, another Fpod was successfully deployed, and a further two sightings were recorded over four days of effort. CCAHD partners from Mauritania, Nigeria and Cameroon particpated in the survey in order to learn more about dolphin survey methodology.  All three partners are hoping to conduct fund-raising and training in order to be able to conduct surveys in their own countries in the near future.  Management and staff from five Marine Protected Areas participated in boat surveys, contributing valuable local knowledge to the project, while at the same time learning about the precarious conservaiton status of AHD, threats to the species, and the important role they play in managing these threats.

Watch this space, as well as the CCAHD Facebook and Twitter accounts or this video by Loro Parque for more news and updates. 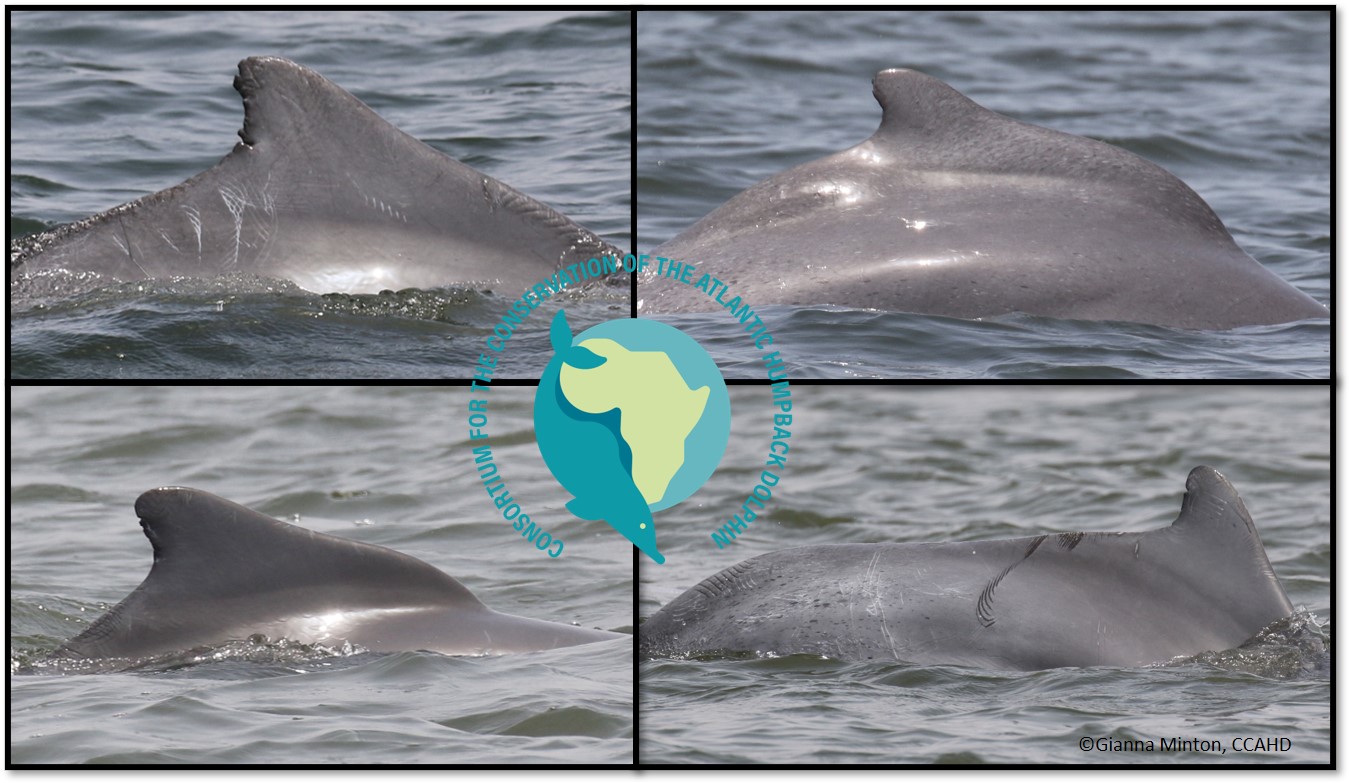 During the March 2022 fieldwork, the team made good progress toward building a catalogue of individually recognisable Atlantic humpback dolphins. 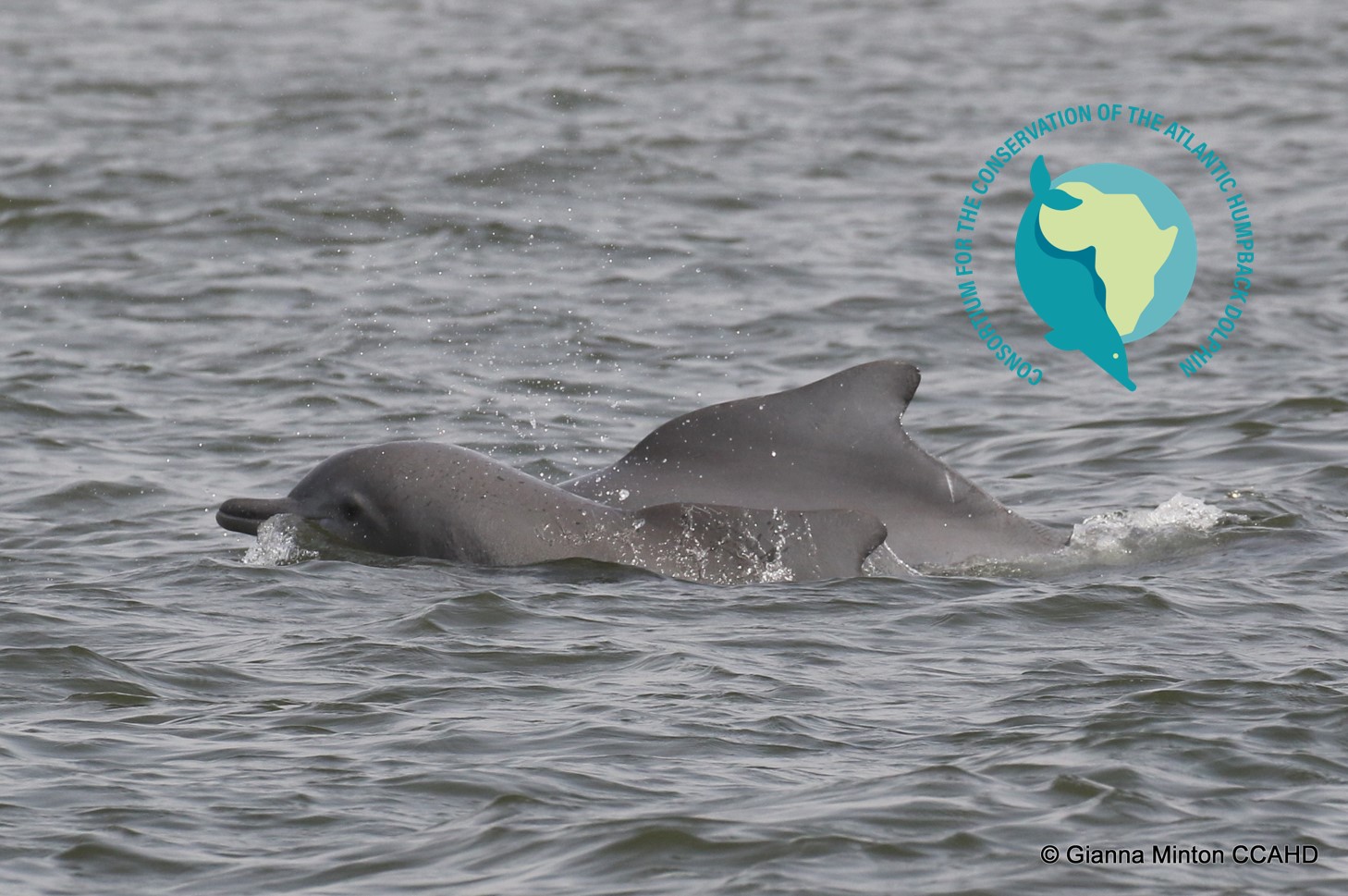 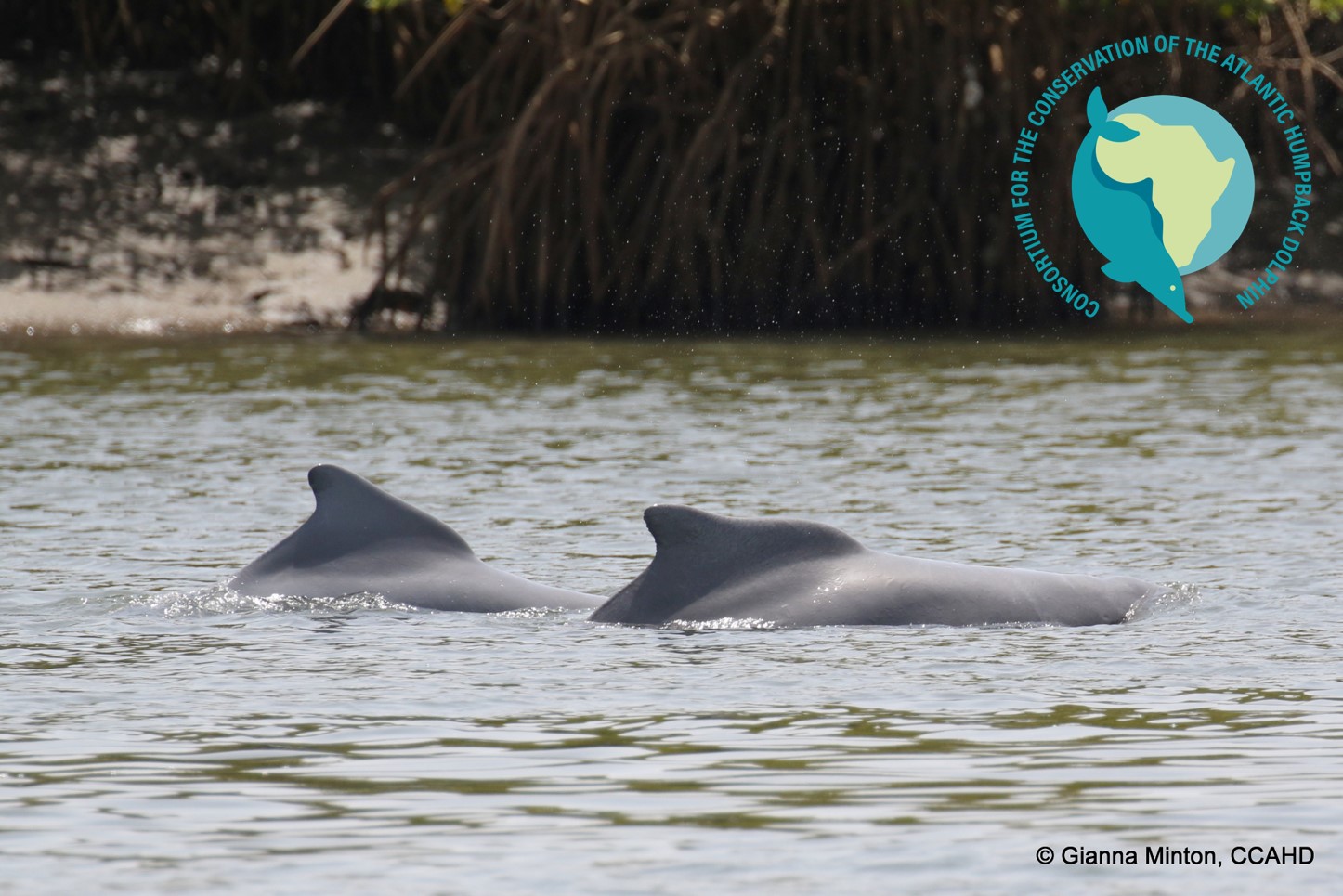 Pair of Atlantic humpback dolphins swimming next to mangroves in the Saloum Delta, Senegal. 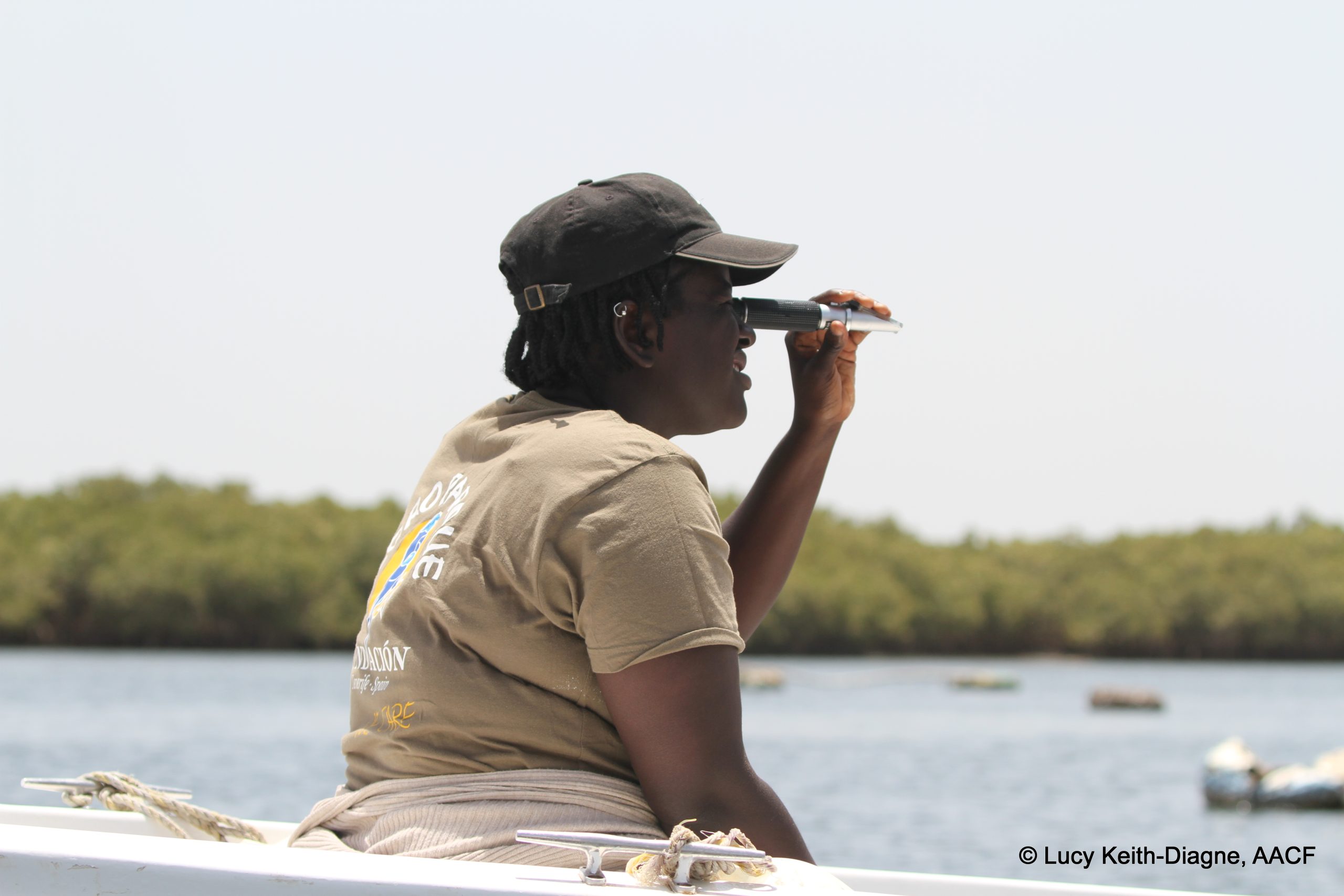 Diana from Senegal reading the salinity on a refractometer during a dolphin sighting. 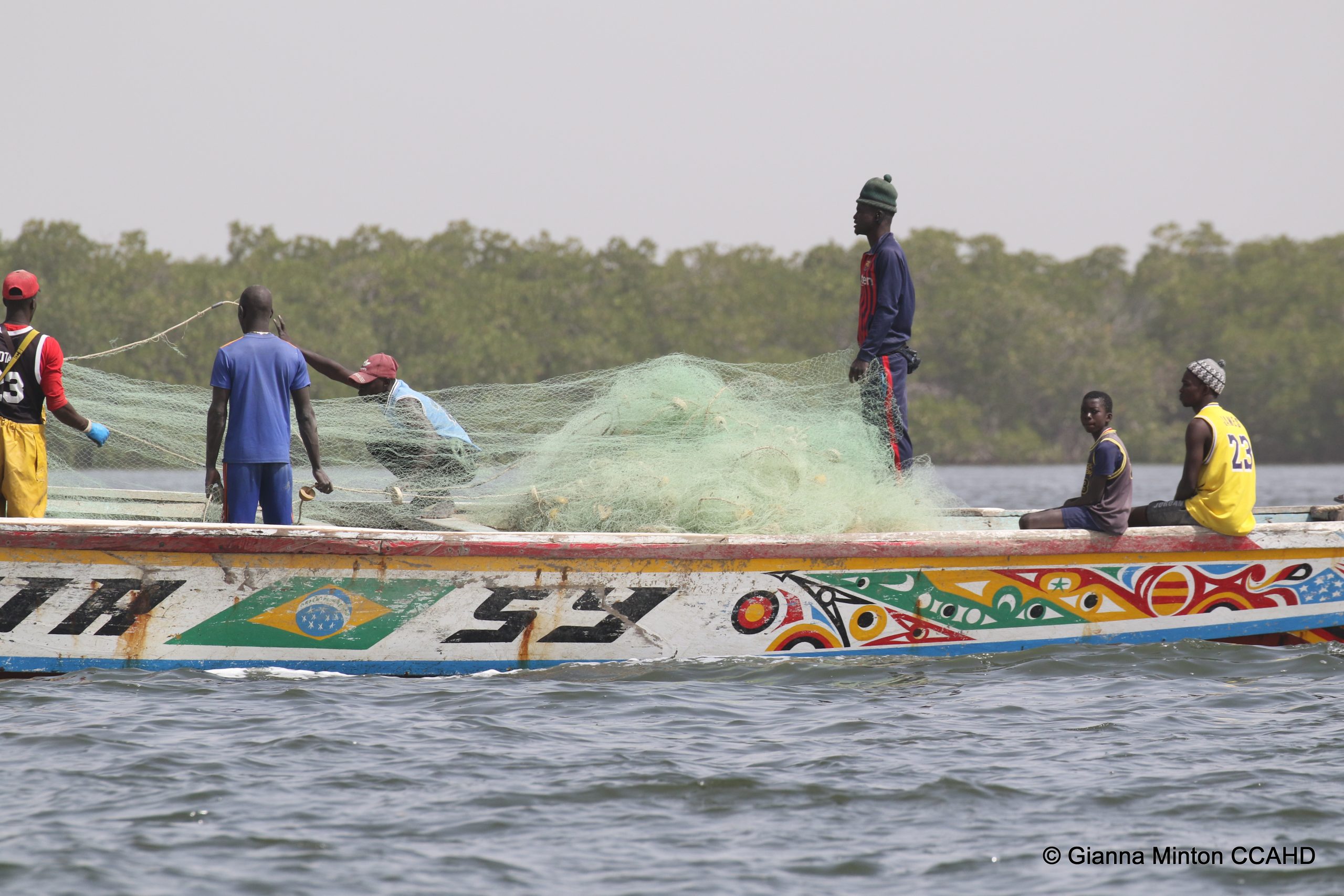 While many vessels with monofilament gillnets were seen in the delta – nets are banned inside the delta and nets are mostly only set in the marine waters offshore. 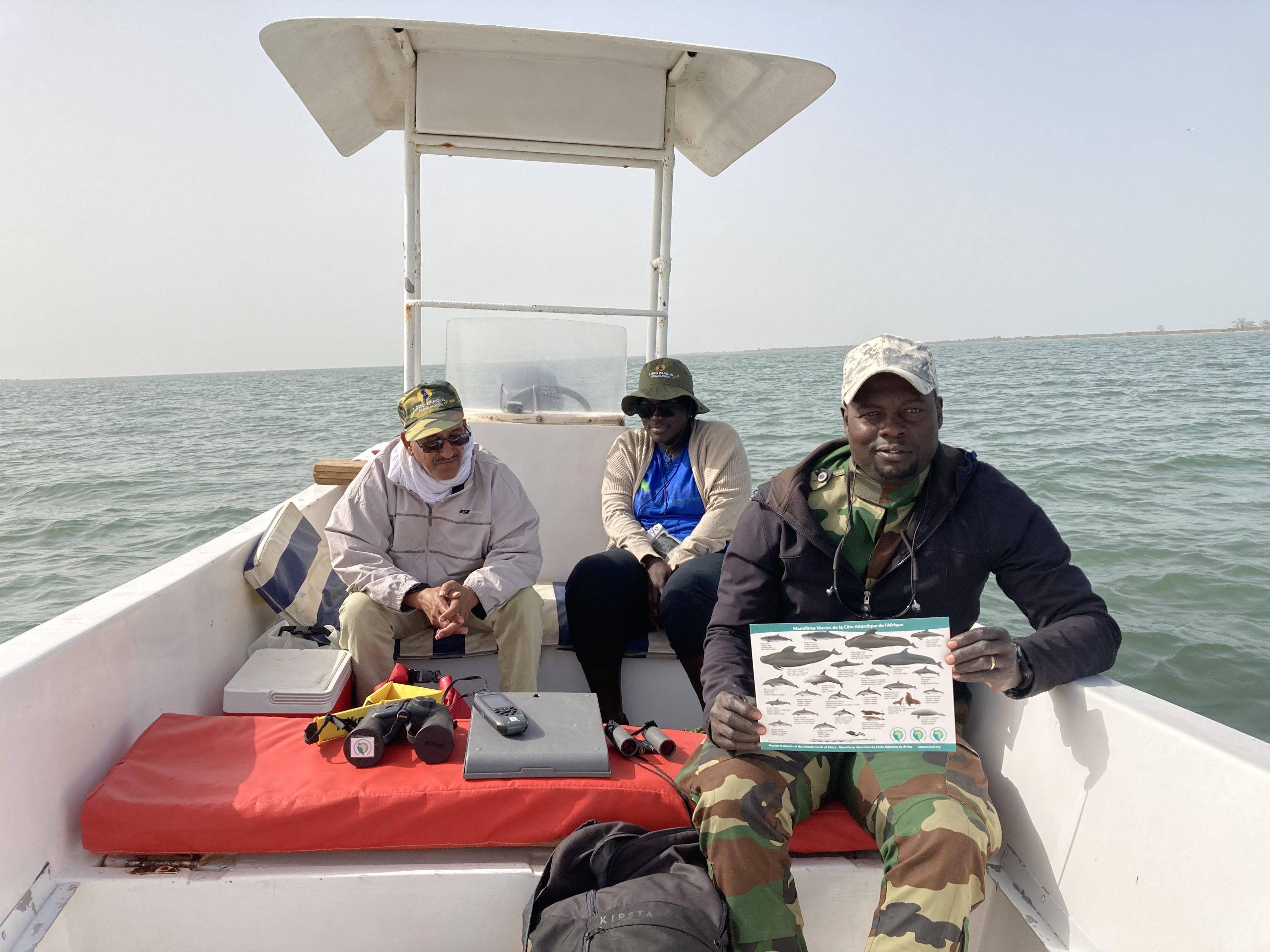 Representatives of five different Marine Protected Areas participated in boat surveys and community workshops during the project. Here an Aliou from the Palmarin Marine Protected Area shows off his CCAHD regional marine mammal identification guide, generously designed and printed with support from Uko Gorter and the American Cetacean Society. 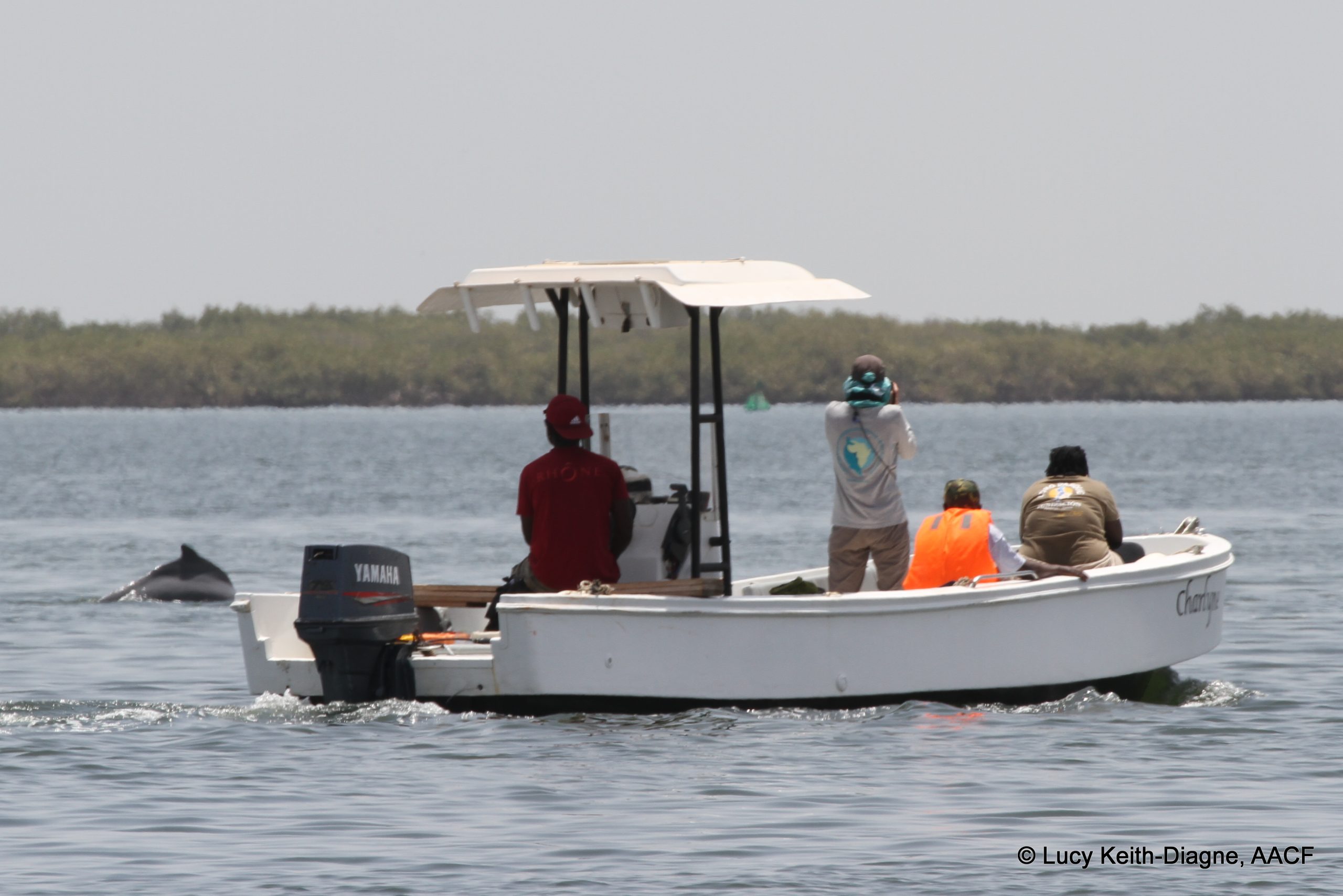 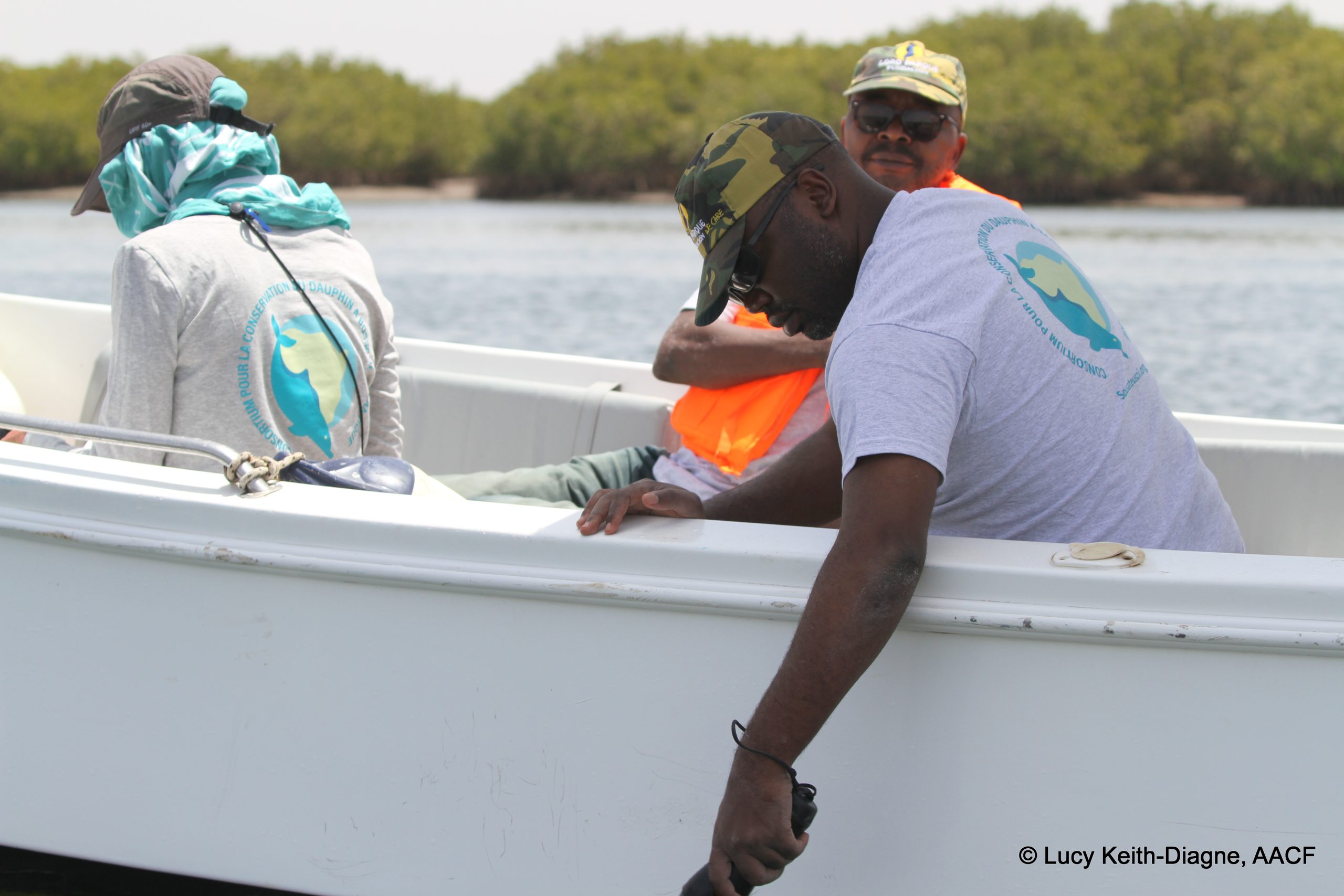 Aristide from Cameroon takes depth and temperature measurements while Edem from Nigeria looks on. 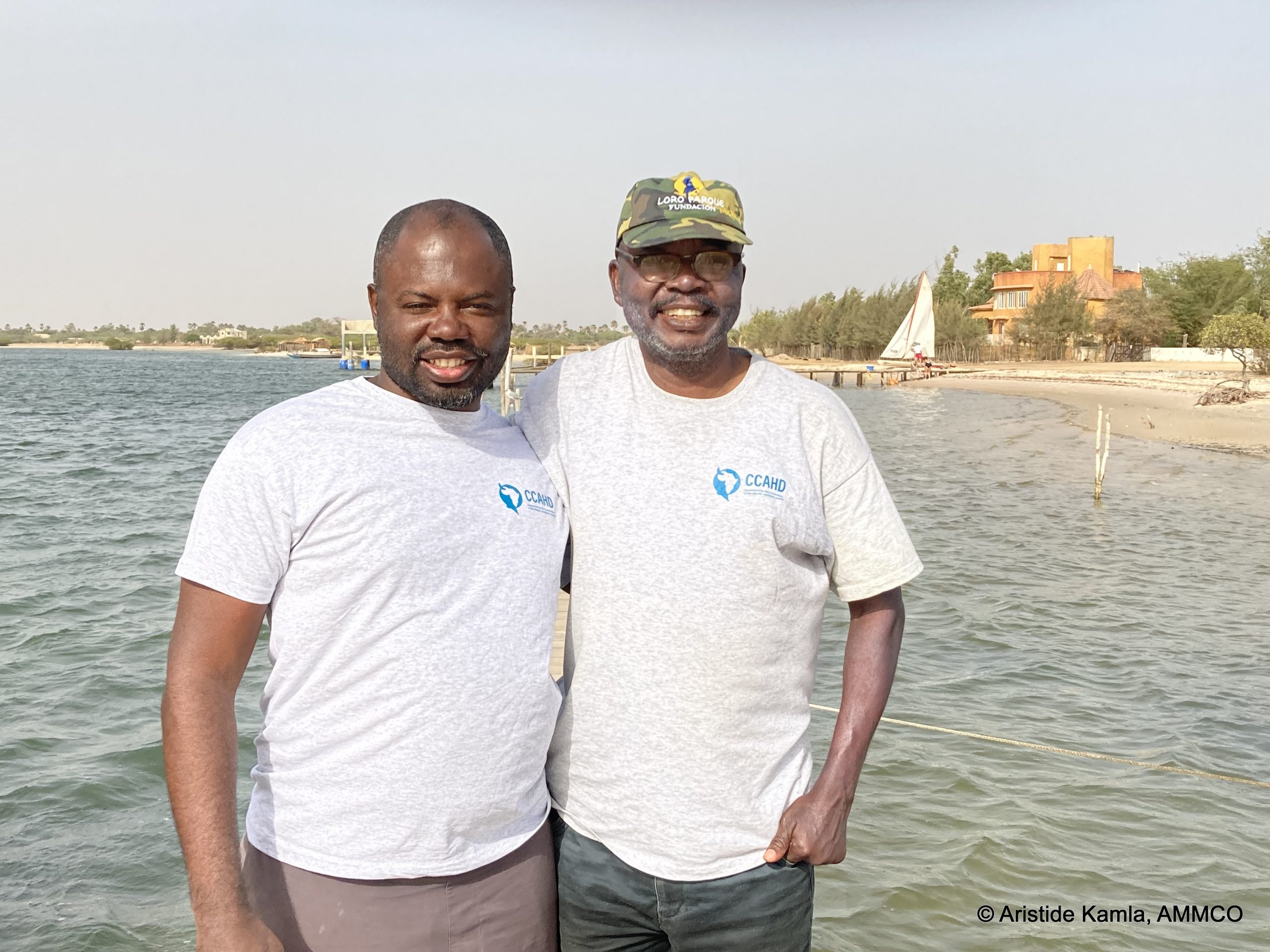 Aristide from Cameroon, and Edem from Nigeria, CCAHD Board members who will take their experience from the Delta Saloum and apply it to Sousa conservation work in their respective countries. 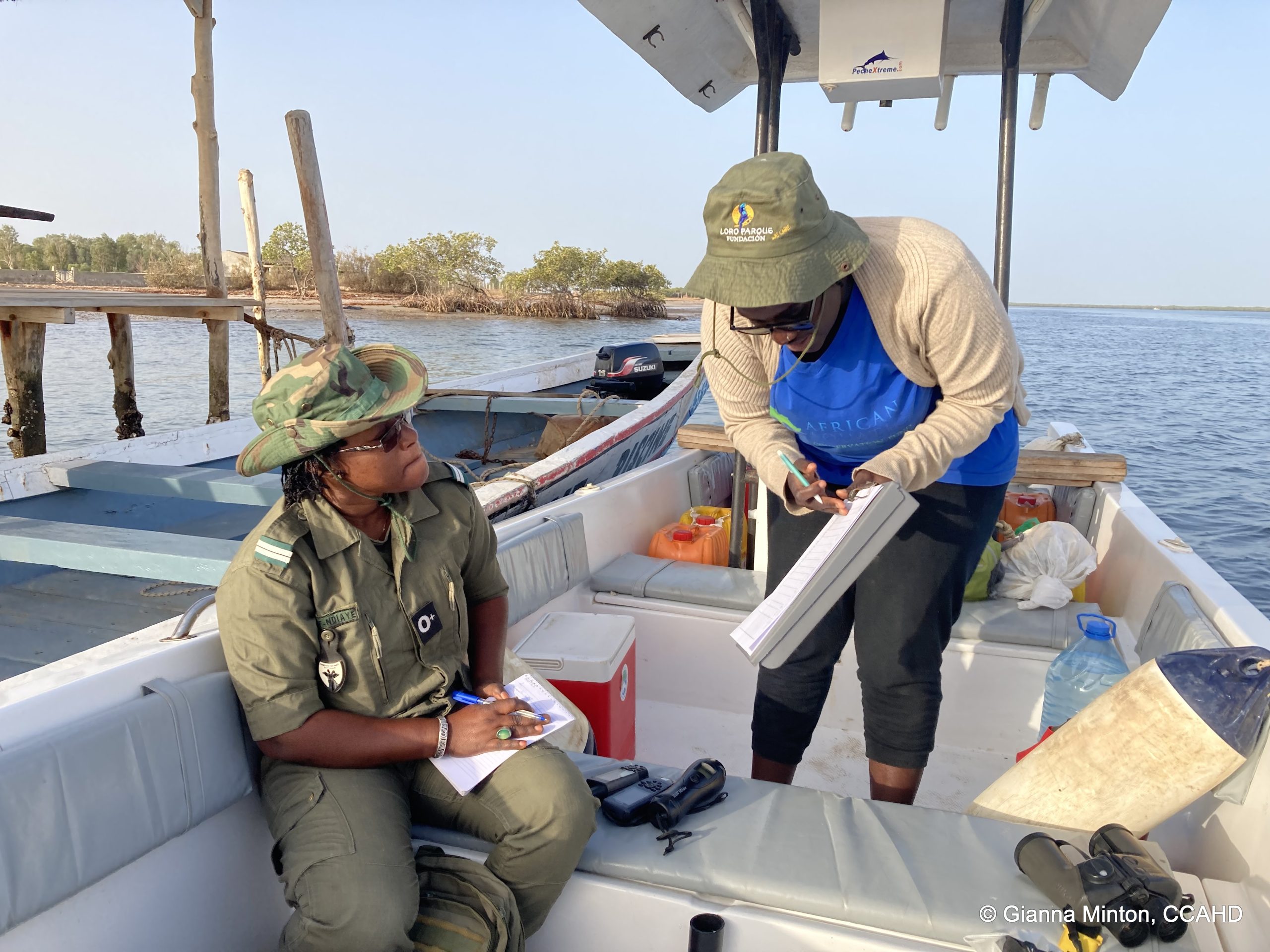 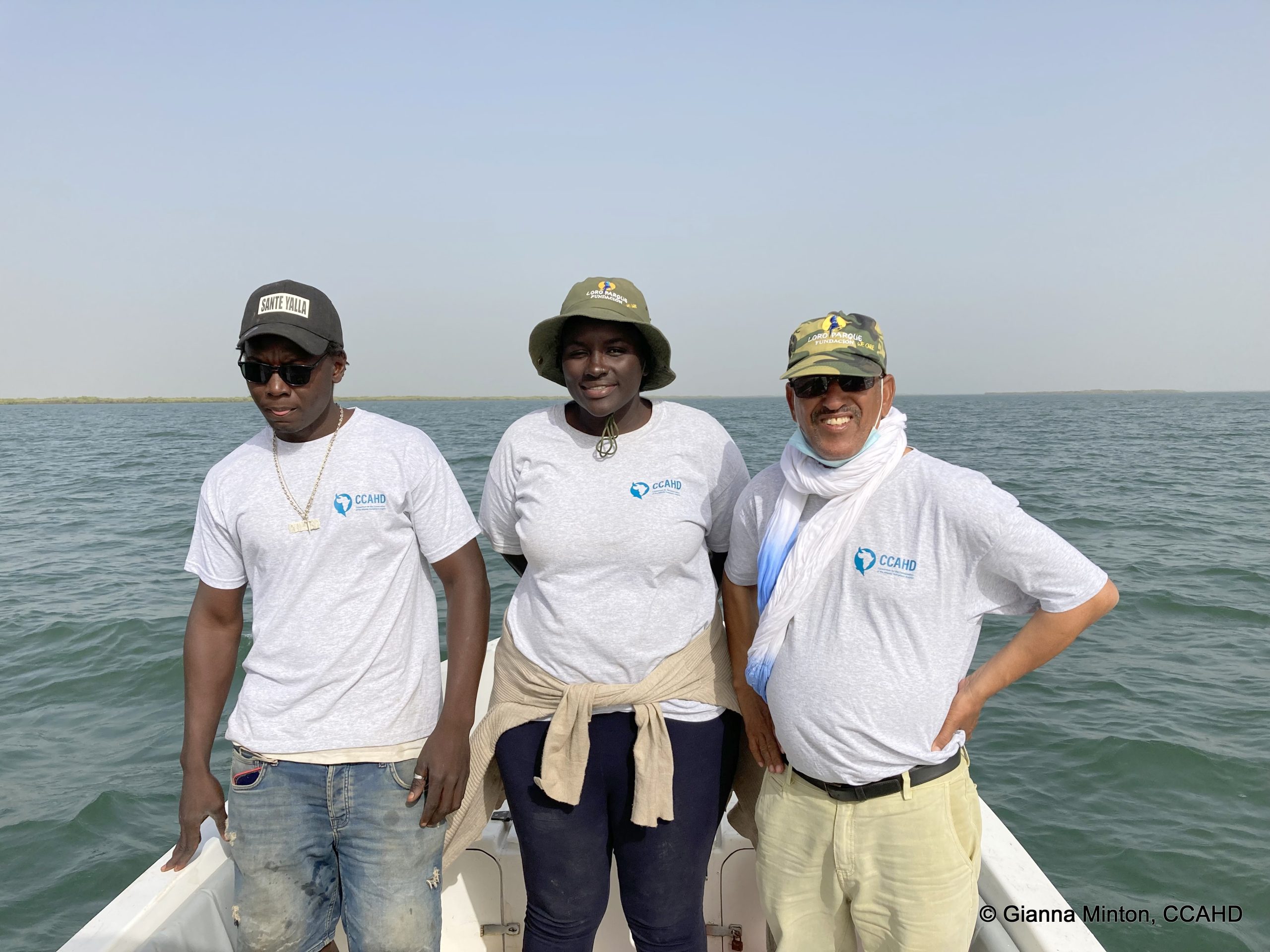 Demba, the most excellent boat driver, and Diana from Senegal, with Cheibany from Mauritania. 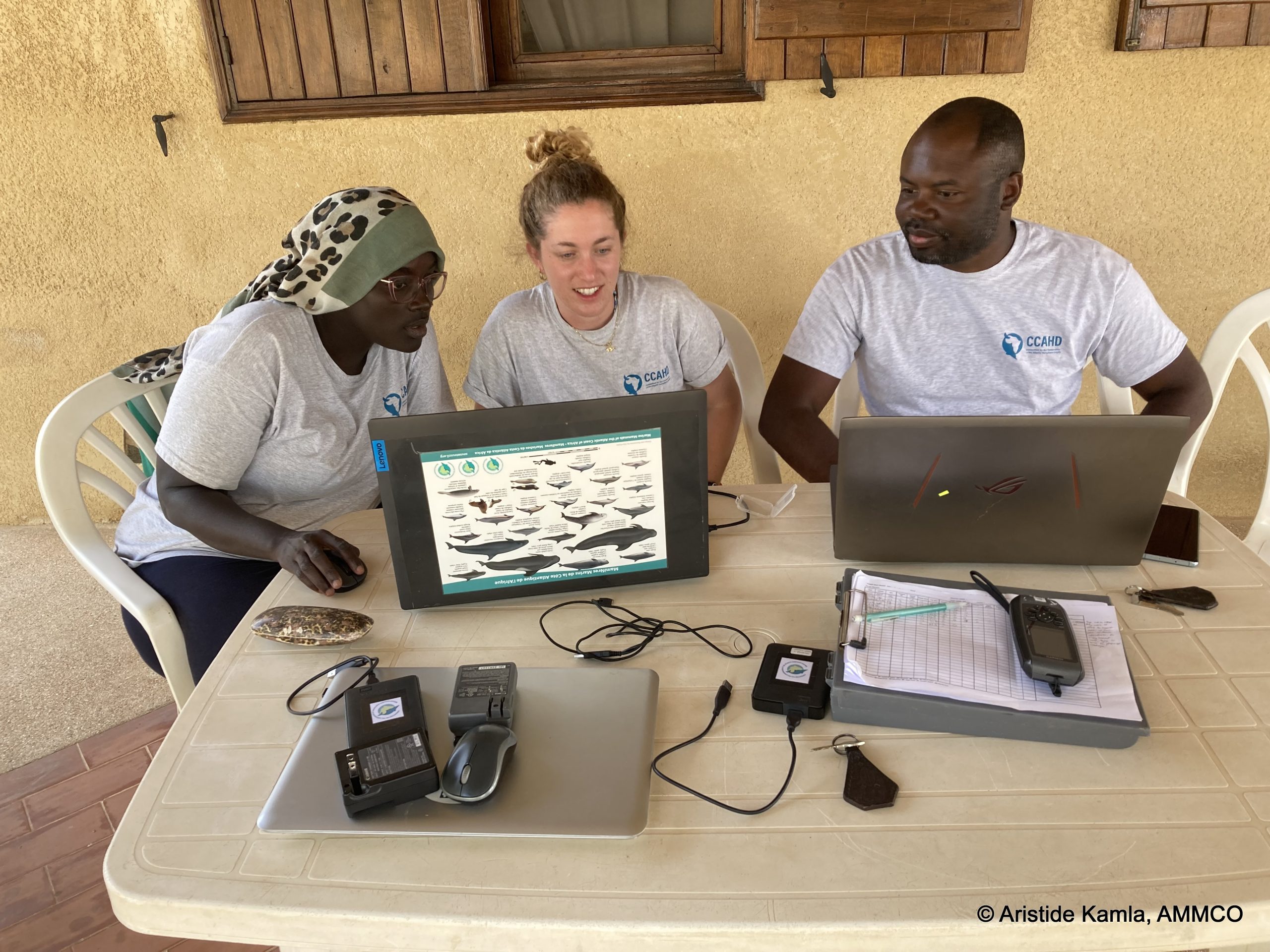 Diana and Nina from AACF and Aristide from AMMCO download and enter data at the end of the day.