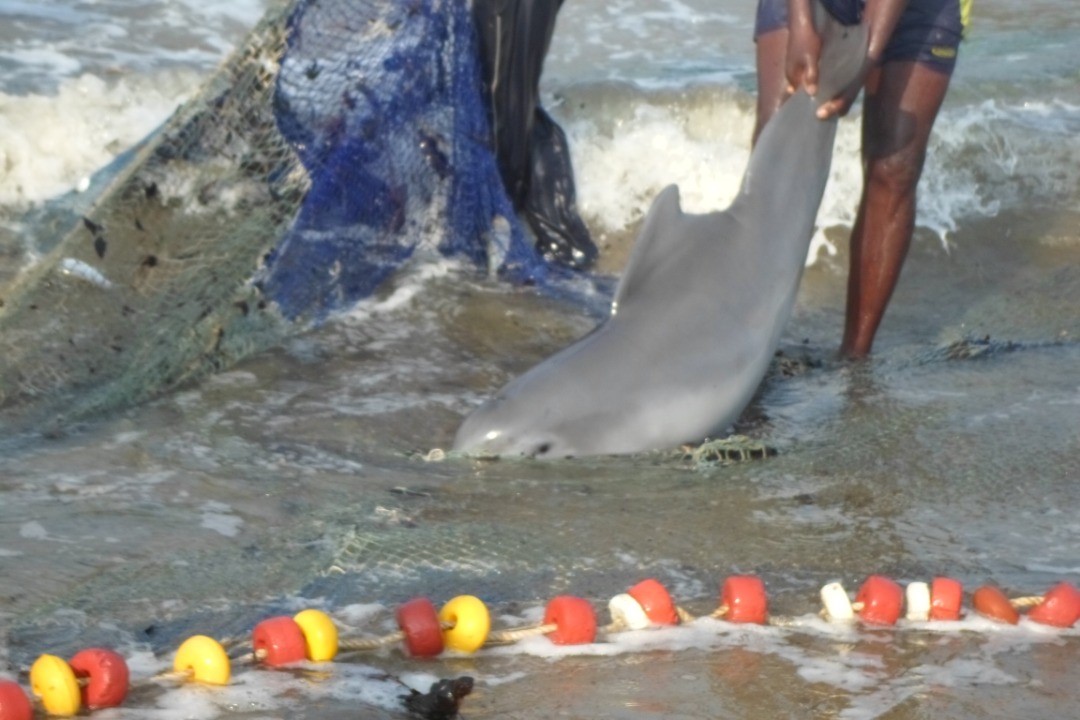 On the morning of December 22nd, 2021, fishermen from the coastal community of Cap Lopez, Gabon, found more in their beach seine net than they had bargained for: Eight Critically Endangered Atlantic humpback dolphins (Sousa teuszii, AHD).

Luckily, these fishers had been working closely over the past several months with Gabon’s National Parks Agency (ANPN) and the newly created local NGO, Aquatic Species, who have been raising awareness about the threat that bycatch poses to endangered, threatened and protected (ETP) species, and local ANPN staff were on hand to help form a rescue team.

Within the first several minutes, four dolphins were able to escape the net unassisted, but four dolphins remained – 2 adults and two smaller individuals, likely to be juveniles. The net was gently pulled closer into shore where the rescue team could work more easily to free them.  While one dolphin used its strength to break through the net and escape, fishermen, ANPN Ecoguards and staff from the Aquatic Species NGO worked together to grab the other three by the tail stock, and pull them to deeper waters beyond the net. Following their release, all four animals appeared fit enough to be able re-join the other four dolphins that had escaped.  It is hoped that the rescued individuals have not suffered any lasting physical trauma, and will be able to thrive. Earlier that same morning a separate group of 12 AHD had been observed to the north of Cap Lopez.

The quick-thinking fishermen and park staff are commended for their decisive action, which seems to have saved the lives of four dolphins of a Critically Endangered species for which every single individual counts. The rescue is also evidence that the awareness raising and capacity building work conducted by the ANPN and Aquatic Species is having a positive impact for the species.  This work followed on from a successful government stakeholder engagement meeting  hosted by the Ministry of Water and Forests’ ‘Direction Générale des Ecosystèmes Aquatiques’ and supported by CCAHD Steering Committee member and ANPN employe, Judicael Regis Kema Kema.  The meeting recommended closer collaboration between fishing communities, government agencies, and NGOs, to reduce threats to AHD.  This incident is a perfect example of that collaboration in action.

At the same time, there are also some lessons that can be learned from the event: