This website is currently under construction, and is expected to launch fully in English, French and Portuguese in December 2020. Please check back in December! 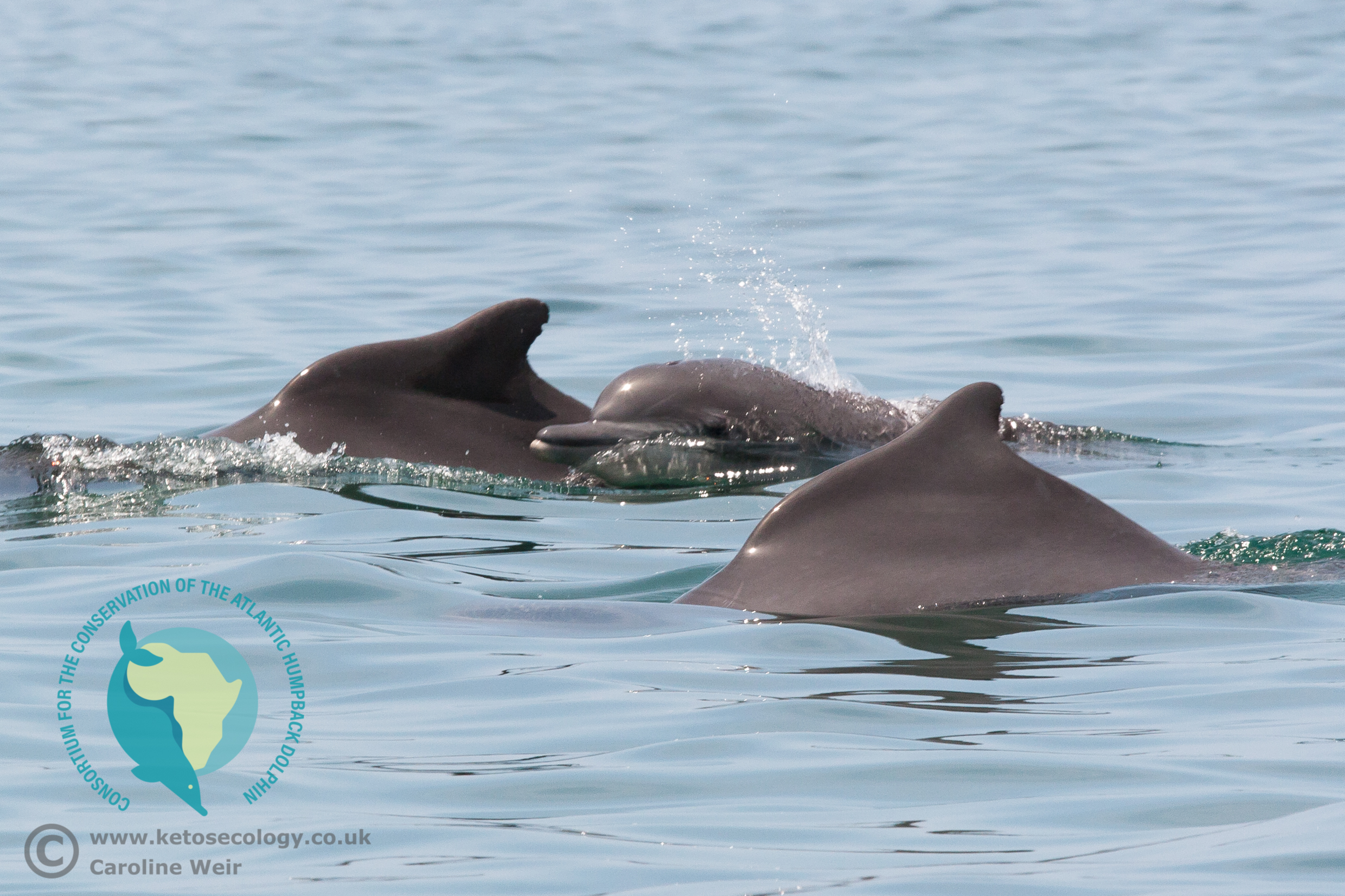 Atlantic humpback dolphins are characterized by, and named for, the diagnostic long, thick hump midway along their dorsal surface on which the small dorsal fin is situated. © Caroline Weir, Ketos Ecology

The Atlantic humpback dolphin (Sousa teuszii) is found in the (sub)tropical waters of the Atlantic African coast. Although the species has been documented from 13 range states between Western Sahara in the north and Angola in the south, information on the species’ distribution, ecology, population size and status is extremely limited. Few targeted field studies have been carried out, and much of what is known originates from opportunistic sightings, strandings, or bycatch reports. 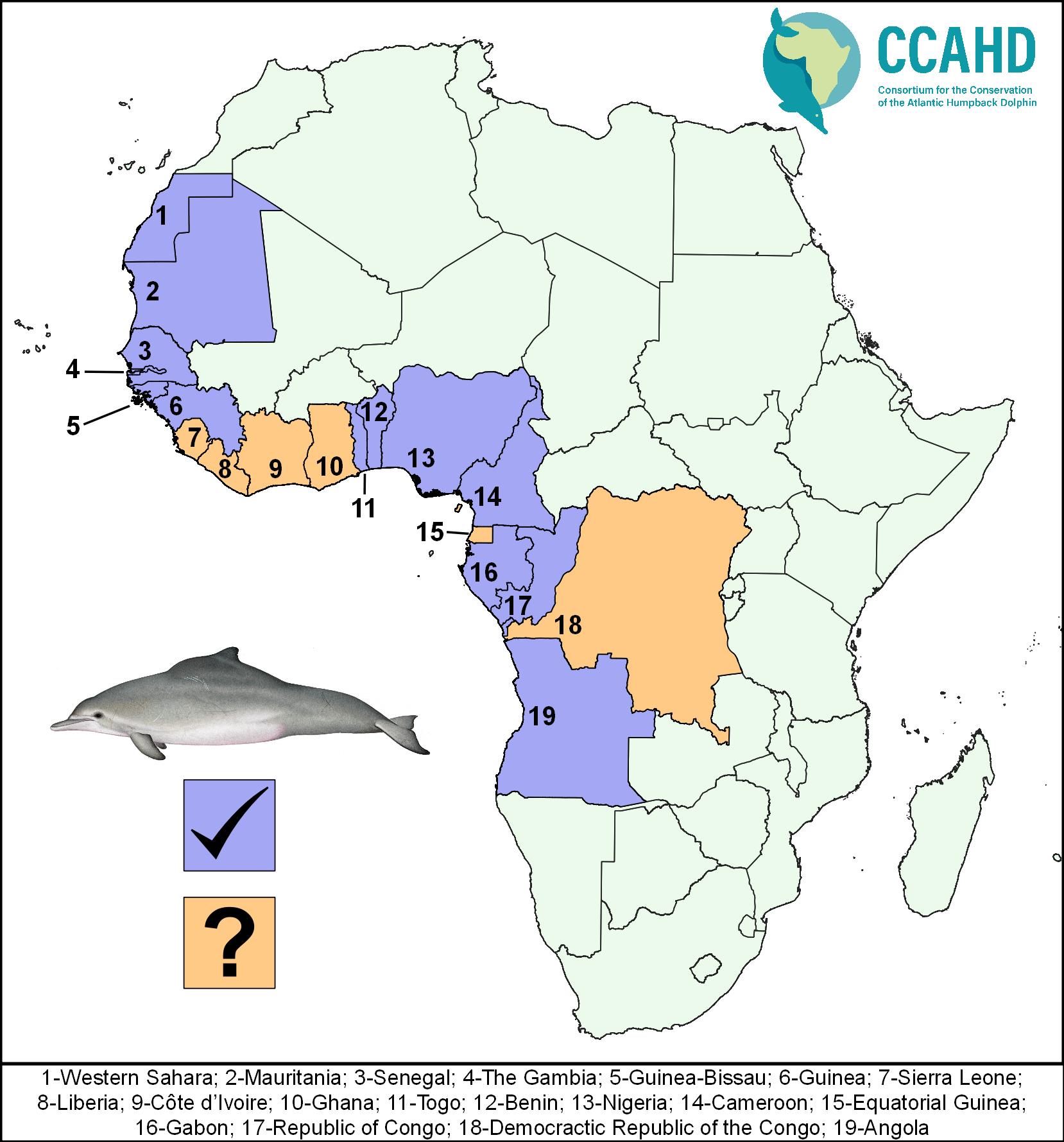 The conservation status of Atlantic humpback dolphins has become a cause of increasing concern over the past two decades. Atlantic humpback dolphins occupy shallow (<20 m depth), nearshore habitat, usually within a few kilometers of the coastline. This limited distribution makes the species particularly vulnerable to human-generated pressures that include gillnet fishing, habitat degradation, coastal construction, and deliberate hunting. While threats and mortality rates have not been systematically studied in most countries, unsustainable bycatch in artisanal gillnet fisheries has been documented in some parts of the range (such as the Republic of Congo) and bycatch is likely the most prevalent range-wide threat. These growing threats, combined with small documented population sizes, have led the Atlantic humpback dolphin to be designated as ‘Critically Endangered’ on the IUCN Red List, and to be listed on Appendix I of the Convention on Migratory Species (CMS). Despite growing concern by scientists and wide acknowledgement of the likely declining conservation status of the species, little concerted progress has been made to implement conservation management measures for the species.

The CCAHD: Collaboration to halt decline

The Consortium for the Conservation of the Atlantic Humpback Dolphin (CCAHD) was established in 2020 with the objective to work towards the long-term sustainability of Atlantic humpback dolphin populations and their habitats through research, awareness, capacity building and action. To achieve this, the CCAHD brings together scientists and conservation bodies from around the globe, to act on priorities identified by the CMS, the IUCN–SSC Cetacean Specialist Group (Integrated Conservation Planning for Cetaceans) and the International Whaling Commission. Conservation of the species broadly requires three complementary approaches:

Supporting the CCAHD – Get Involved!

We are grateful to the Friends of Nuremberg Zoo and NUREMBERG ZOO for providing funding for the development of this website and support of CCAHD activities during the final quarter of 2020. Additional support in kind has been donated by The Wildlife Conservation Society, Ketos Ecology, and the African Aquatic Conservation Fund.